Victoria Adeyele, popularly known as Vee, has been lamenting over her marital predicament, as she reacts to her mother’s pressure to get married.

Vee, who had a past relationship with Neo Akpofure, a fellow reality star, stated that the pressure to marry is increasing as her mother reminds her every day that she was already married at an her age.

Vee lamented that there was no man available for a relationship at the moment and that someone should tell Nigerian mothers to stop putting pressure on them.

“My mum never fails to tell me that at my age, she was married with a child. Can someone tell our Nigerian mothers that nothing dey streets currently? The pressure is truly getting worser”

However, some of her followers did not agree with her as one said her preference for men with expensive cars has contributed to her singleness.

While another one said; there are many available men, but good men are scarce.

Mr Giving@blessgracesneh: There’s something in the street, it is you that is looking for Lamborghini and Porsche guys 😂🤣😂🤣

Dr.blachatan@Drblachatan: after dem don do hookup 4rm high school to university finish..they will now be looking for one sucker simp to marry😂😂..oga this is not 2010!

I can’t find a man to date me – BBNaija Vee laments as she reacts to pressure from her mother to get married was last modified: September 17th, 2022 by ABBSTAFF-DIANA
0
Facebook Twitter Google + Pinterest “My heart is bleeding” Actress Uche Ogbodo cries out 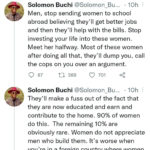 I can’t imagine living in this world...

I was afraid, sometimes depressed, and confused...