In series of tweets, she claimed Hundeyin’s application was rejected by British immigration.

She also disclosed that he has been hiding in the Benin Republic after his application was rejected.

“Writer David Hundeyin’s UK asylum bid rejected. British immigration was not convinced. He told his followers he self-exiled himself because of #EndSars and his investigative work. Turns out he was applying for asylum based on the anti-gay law. Never knew he was GAY

“ICYMI: Writer and self-acclaimed investigative journalist David Hundeyin has now REMOVED his RAINBOW EMOJI from his profile. It was there in the first place to make UK immigration think he was GAY. Don’t use the persecution of real gays in Nigeria to get your own agenda

“Real journalists don’t post evidence of anything. We protect the source. Mr Hundeyin is the gutter journalist. He needs formal training as he did not attend any journalism or mass communications school. He studied English and wrote for media houses.

“Writer Hundeyin is currently holed up in a “West African safe house” in the Republic of Benin (too close to Nigeria and the diplomatic ambassador happens to be a former @HQNigerianArmy COAS he accused of orchestrating the #EndSARS Lekki tollgate event. NOT INTELLIGENT.” 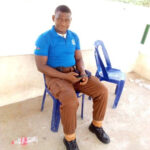