Ossai Succes Ovie, an aide to the Governor of Delta state, has taken to his social media page to tell how his brother’s ex girlfriend’s senses of entitlement led to the end of their relationship.

”A young girl in warri once dated a yahoo yahoo guy and after the breakup , she met my brother .

They started dating but unfortunately for her , my brother though has money, is not that generous like that yahoo yahoo guy.

Just last week here, my brother bought TECNO PHONE worth 55k for the girl after her phone was stolen.

Guess what , the girl rejected the phone saying that she can’t use TECNO PHONE because the phone that got stolen was IPhone 12 Pro Max.

My brother without argument collected the TECNO PHONE from her and left the house .

Unknowingly to the girl , my brother bought IPhone 13 pro max but kept it at home hoping to see the girl reaction after presenting the TECNO PHONE to her .

Now , her reaction and ungratefulness has destroyed her relationship.” 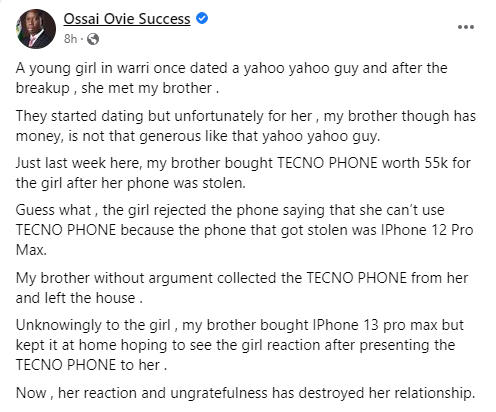 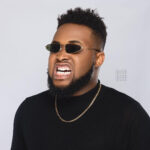 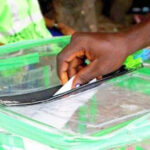 It is constitutionally impossible to resume voter registration – INEC

Regina Daniels has a message for those...

I know secrets about you that the...