Annie Idibia’s marital drama with 2face Idibia is once again the talk of the town.

After a Twitter user compared her to Jesus Christ, the entrepreneur was made a laughing stock.

A netizen asked for people’s names of characters who have suffered more than Jesus.

“In your opinion, who’s a character that has suffered more than Jesus???”.

One tweep, who responded to his post, named Annie Idibia a character who had suffered.

This viral post was mocked by many for her marital pains.

Some have even compared Annie with Chioma who has endured Davido’s babymamas and cheating habits.

mantha___1: She don go through alot

annie_haira_extension: That woman has a big heart. Tuface suppose to fear her o

beripounds: Ah Omo this is deep I can’t hold.on laughter

miss_talithamor: No naaaa no…….that right there is violation……. Personally I won’t have it

ayoka_johnson: Jesus! This is not nice na

sandy_special22: This is so wrong how do u want her to feel after seeing this

blavq_mia: That was harsh thou

darabong: So sad. It’s not funny pls stop making a joke out of this

After the musician had apologized publicly to Annie Idibia for her hurt feelings, he gave the cane.

Sharing a video of Annie in bed on his Instagram page, 2face Idibia wrote, “Forever Grateful to u @annieidibia1 Love u till I die…Ur kind is rare #GRATEFUL to u forever. Sorry I messed it all up.”

He apologized for the embarrassment that he had caused his family, including his children, his mother, and his entire family, as well as his management.

However, he made it clear that he was not looking for sympathy or trying to make himself look better, as it wasn’t reverse psychology.

He confessed that he was a sloppy father, husband, and baby daddy and that he didn’t have any excuses.

2face said that he was going back to his default setting and denouncing his role as a role model, making up for lost time.

“Las las this is no stunt. I’m sorry for all the embarrassment I’ve caused my wife, my kids, my mother and all our families and my management team. I’m not looking for no sympathy. I’m not trying to make myself look good. This is no reverse psychology bullshit I simply just don’t want to be the one that always apologize. I’ve been a shitty father and a shitty husband and shitty baby daddy. I have no excuses. I just want to do right my wife, and my kids and their moms and my mom and all families and my manager and friends. I beg ya all to pls just face me and cancel me anyhow m I’ve been a star for so long that my bulletproof vest is worn-out I’m not quitting or suicidal or giving up. I just want to go back to my default settings and denounce my role mod status and make up lost time with my kids and give y’all music that will make make u remember and understand why they call me 2BABA”.

Weighing in on their marital drama, Bisi Alimi who doesn’t pity the actress, called her an enabler.

The gay rights activist reinterated that he doesn’t pity the mother of two.

He, however, wished the couple the best.

“Annie Idibia is an enabler, stop having pity for her.

Good luck to them both”. 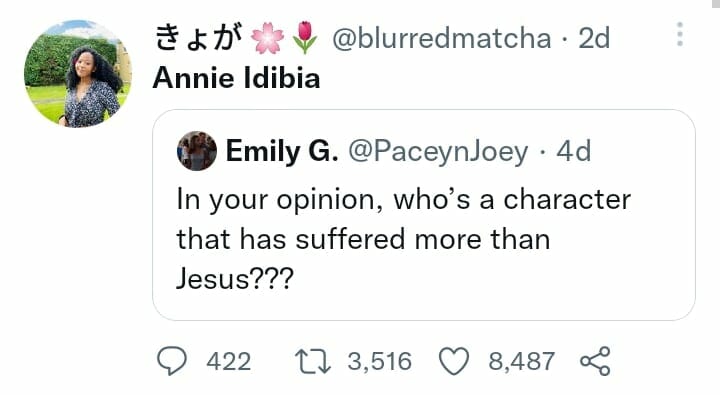 Tears flow endlessly as the Body of...