Bovi, a popular comedian, refused to acknowledge the disclaimer in the viral video of Nancy Isime being unclad.

Nollywood actress has been trending for days after a movie scene from a recently released Netflix movie went viral on social media.

Nancy Isime was seen in one scene unclad, with Richard Mofe touching her breasts. The actress, however, has spoken out to discredit the scene. She claims that the body in the movie scene isn’t hers.

However, it seems some fans are not convinced about her education on her page. Comedian Bovi has taken to the comment section to claim that he still believes it was Nancy in the movie scene. 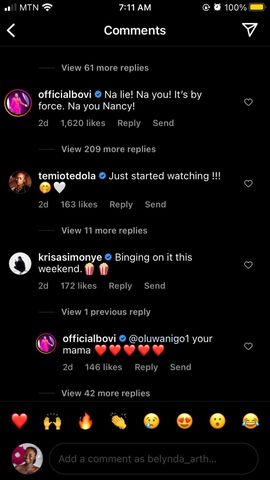 Actor, Chidi Mokeme reveals he was away...

“Marriage is management” Charleyboy and his wife...

My response to those who describe Shanty...