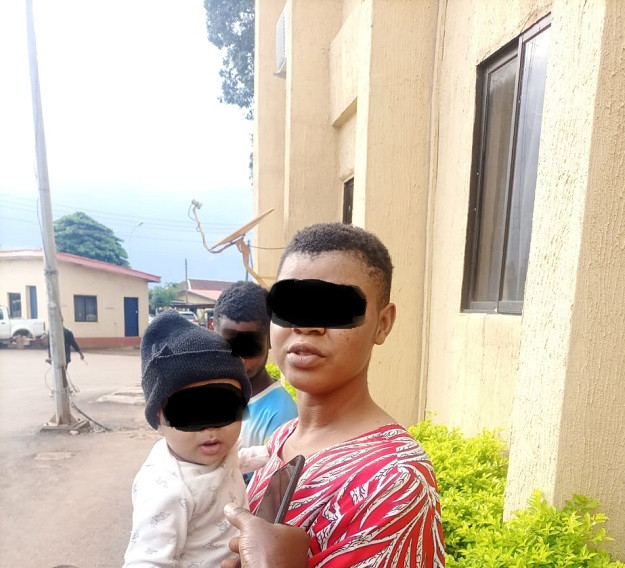 Ebonyi State Police Command recovered a five-month-old baby sold by her biological mom to a maternity care operator for N500,000.

Ola gave birth in April 2022 at Obigbo (Rivers state) and then conspired to sell the baby to Elechi Ann Mma owner of the maternity home.

Aliyu Garba (the State Commissioner of Police), confirmed this development in a statement signed by SP Chris Anyanwu, the spokesperson for the command. He stated that the baby was handed to the biological mother for upkeep and care, pending further developments.

“Ola Echegbu Chima, a 20yr old girl, a native of Amangwu Edda in Afikpo-South L.G.A was impregnated out of wedlock in the year, 2021, by Jonah Ogbonna Ogbuagu of the same address,” the statement read.

“On 12th April 2022, she put to bed, but a few days after sold the child to Elechi Ann Mma, owner of a local maternity home and native of Ezi Okpani, Evuma village in Afikpo North LGA of Ebonyi State, who was already arrested for another offense of child-trafficking.

“So on behalf of Ebonyi State police command, I am handing over the baby recovered through the joint efforts of SP Philip Agu-led Crack Squad and SP Miliscent Amad-led D7 team of detectives attached to the SCIID in Abakaliki, back to his biological mother, Ola Echegbu Chima for care and upkeep pending further developments,” he said.

Police recover a five-month-old baby sold by her own biological mother for N500,000 in Ebonyi was last modified: September 20th, 2022 by ABBStaff-Mayowa
0
Facebook Twitter Google + Pinterest Age is telling on me, working for...

Lawyer celebrates his mum as he runs...