Former US president, Donald Trump has praised Vladimir Putin’s invasion plan of Ukraine as ‘genius’ and called the Russian leader ‘very savvy,’ hours after Putin ordered thousands of troops into two separatist regions of Ukraine after declaring them independent.

Speaking with conservative podcaster Buck Sexton on Tuesday February 22, the former president said: ‘I went in yesterday and there was a television screen, and I said, “This is genius,”‘ Trump said.

‘No, but think of it. Here’s a guy who’s very savvy,’ Trump went on. ‘I know him very well. Very, very, very well. Had I been in office, not even thinkable, this never would have happened.’

Trump added: ‘But here’s a guy that says, you know, ‘I’m gonna declare a big portion of Ukraine independent,’ he used the word ‘independent’ and ‘we’re gonna go out and we’re gonna go in and we’re gonna help keep peace.’ You gotta say that’s pretty savvy. And you know what the response was from Biden? There was no response. They didn’t have one for that. No, it’s very sad. Very sad.’

Trump also called President Biden ‘a man who has no concept of what he’s doing.’

He also claimed that Vladimir Putin never would have invaded Ukraine if he were still president, and said that Russia has become ‘very very rich’ under President Biden.

‘If properly handled, there was absolutely no reason that the situation currently happening in Ukraine should have happened at all,’ Trump said in a statement Tuesday. ‘I know Vladimir Putin very well, and he would have never done during the Trump Administration what he is doing now, no way!’ 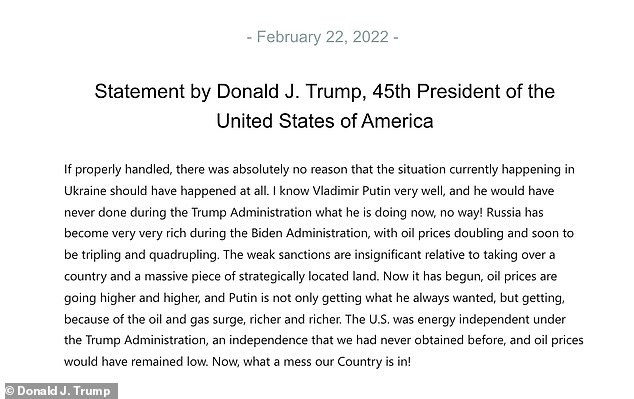 ‘The weak sanctions are insignificant relative to taking over a country and a massive piece of strategically located land. Now it has begun, oil prices are going higher and higher, and Putin is not only getting what he always wanted, but getting, because of the oil and gas surge, richer and richer.’

Russian President Vladimir Putin on Monday sent troops into the pro-Russian regions of Luhansk and Donetsk as he declared those regions independent republics and no longer a part of Ukraine.

On Tuesday Biden announced his ‘first tranche’ of sanctions that included new financial restrictions on two of Russia largest banks, VEB and the military bank, specific Russian oligarchs, and cutting the nation off from Western financing.

Trump praises Putin’s invasion of Ukraine as ‘GENIUS’, says it won’t have happened if he was still president was last modified: February 23rd, 2022 by ABBStaff-Mayowa
0
Facebook Twitter Google + Pinterest Actress Sienna Miller, 40, steps out with...