Two children died and three men sustained injuries in the collapse of water tank scaffolding from another building on their bungalow on Adeleye Street Lady Lark, Lagos State, on Sunday, August 21.

The Lagos State Emergency Management Agency Permanent Secretary, Dr. Olufemi Okeosanyintolu confirmed the tragic incident and said that the agency had activated all of its response plans. Additional efforts are being made for rescue operations for those still trapped under the rubble.

The Agency activated its response to the above incident and upon arrival at the incident scene, discovered that the tank scaffolding of a two-story building collapsed on a bungalow beside it and affected two rooms.

Unfortunately two children died from the impact. Three adult males sustained injuries and were taken to nearby hospitals.

The Agency’s response team alongside Lagos State Fire and LASBCA are responders at the incident scene. Rescue operation ongoing.” Five arrested over attack on convoy of Oyetola’s wife 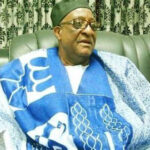 Over 60m Nigerians are suffering from mental...

“Let me know what am suffering for”...