Iyabo Ojo has taken to her social media page to toot her horns.

A single mother of two was praised for her work with her children and her extended family.

She believes God gave her the title “Queen Mother” and that she has done a great job and still doing one.

Iyabo Ojo said that no one could take it away from her.

Priscilla’s mother, who was involved in various scandals over the years has declared that no one can change her story or lower her parenting skills.

Iyabo said she would tell the whole story in order to encourage the weak.

“God gave me that position #Queenmother & I did a great job & still doing….no one can ever take that away from me, no matter how hard you try, you can never change the narrative, you can never water down my parental skills…… I Alice Iyabo Ojo, I am the best Mother, Daughter, Aunty, Sister, Friend, Boss or godmother anyone could ever wish for………. & I wear my crown with soooooooooooooo much pride………one day, I will tell my full story God willing to encourage the weak heart”.

The actress has been involved in scandals for the past month.

The entrepreneur was dragged online for sleeping with men to aid her luxury lifestyle.

News reported that Iyabo Obo had reacted to the reports about her alleged affair of marriage with married men.

Adebimpe Alasoadura, a Nigerian woman living in diaspora, has called out Iyabo Objo and other actresses, claiming that they allegedly constantly mislead young girls by their extravagant lifestyles.

In an Instagram viral video, Adebimpe slammed Iyabo Ojo, and other actresses, for always sleeping with wealthy men that allegedly funded their extravagant lifestyles.

She also compared Iyabo with her senior colleagues Sola Sobowale, Mama Rainbow and Mama Rainbow who frequently appear in movies. Despite their hard work, she cannot afford the extravagant lifestyle. Continue reading.

Iyabo Ojo, unbothered by the rumours was happy as she awaited her many blessings.

According to the actress, life is more fun when you are finally at the end of the dark tunnel.

According to Iyabo’s vision, light and positive results are what she will always see. 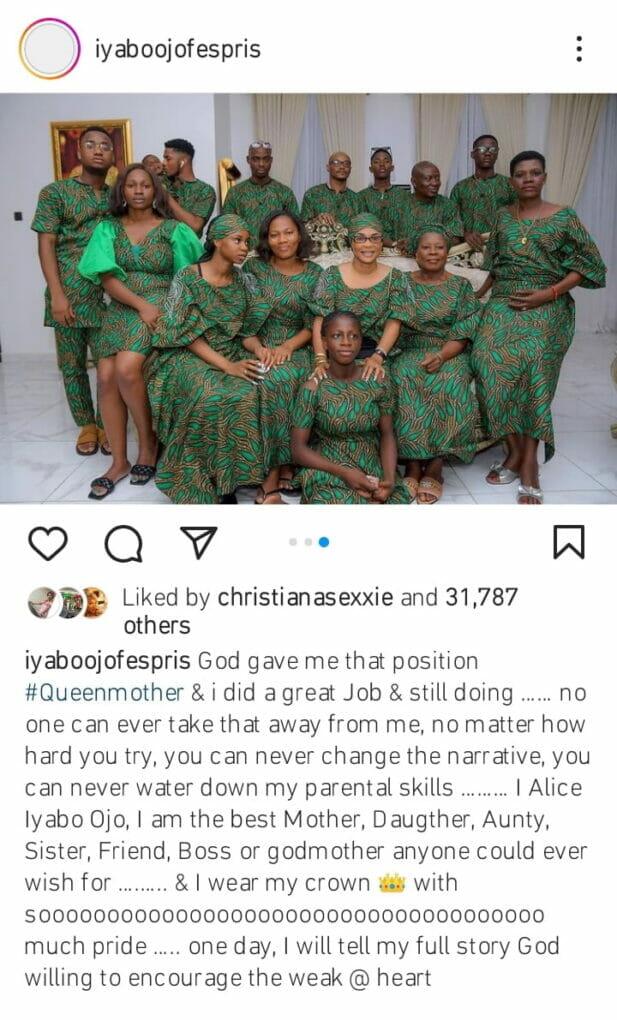 “You can never change my narrative, I will tell my full story” Iyabo Ojo vows was last modified: August 28th, 2022 by ABBSTAFF-DIANA
0
Facebook Twitter Google + Pinterest Mide Martins receives surprise from a Grandma at birthday party

The scale of oil theft has significantly...